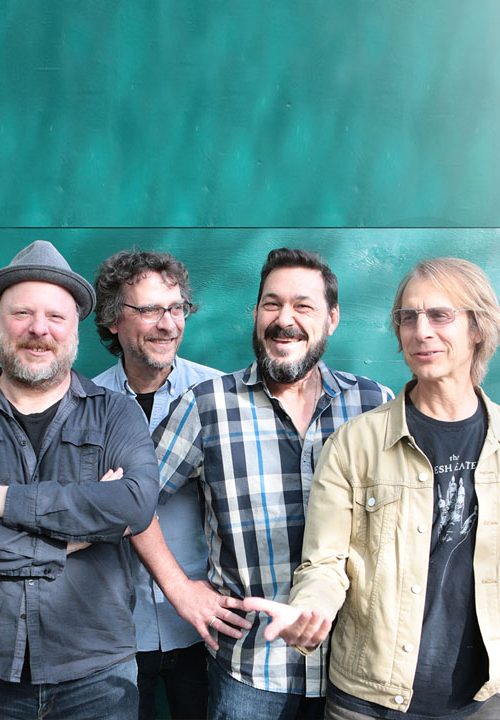 Since the late ’80s, Mudhoney – the Seattle-based foursome whose muck-crusted version of rock, shot through with caustic wit and battened down by a ferocious low end – has been a high-pH tonic against the ludicrous and the insipid.

Thirty years later, the world is experiencing a particularly high-water moment for both those ideals. But just in time, vocalist Mark Arm, guitarist Steve Turner, bassist Guy Maddison, and drummer Dan Peters are back with Digital Garbage, a barbed-wire-trimmed collection of sonic brickbats. Arm’s raw yawp and his bandmates’ long-honed chemistry make Digital Garbage an ideal release valve for the 2018 pressure cooker, its insistent rhythms forcing movement and Arm’s sardonic lyrics offering a funhouse-mirror companion to the ever-more-ridiculous news cycle. “My sense of humor is dark, and these are dark times,” says Arm. “I suppose it’s only getting darker.” “I would’ve really just loved to write songs about just hanging out on the beach, and going on a nice vacation, but you know, that probably doesn’t make for great rock.”

Mudhoney, however, know what does make great rock—and the riffs and fury of Digital Garbage will stand the test of time, even if the particulars fade away. “I’ve tried to keep things somewhat universal, so that this album doesn’t just seem like of this time—hopefully some of this stuff will go away,” Arm laughs. “You don’t want to say in the future, ‘Hey, those lyrics are still relevant. Great!’”

This website uses cookies to improve your experience while you navigate through the website. Out of these, the cookies that are categorized as necessary are stored on your browser as they are essential for the working of basic functionalities of the website. We also use third-party cookies that help us analyze and understand how you use this website. These cookies will be stored in your browser only with your consent. You also have the option to opt-out of these cookies. But opting out of some of these cookies may affect your browsing experience.
Necessary Always Enabled
Necessary cookies are absolutely essential for the website to function properly. This category only includes cookies that ensures basic functionalities and security features of the website. These cookies do not store any personal information.
Non-necessary
Any cookies that may not be particularly necessary for the website to function and is used specifically to collect user personal data via analytics, ads, other embedded contents are termed as non-necessary cookies. It is mandatory to procure user consent prior to running these cookies on your website.
SAVE & ACCEPT